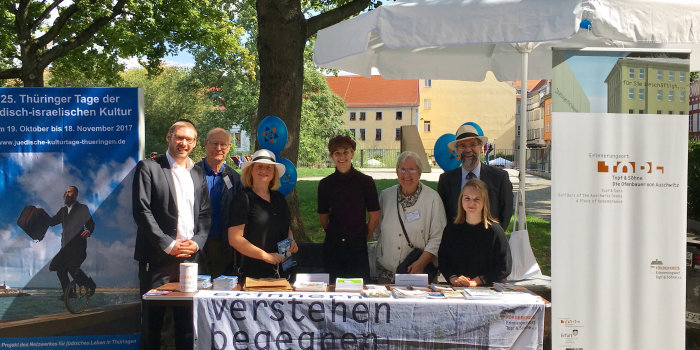 Zoom Picture: Members of the Society for the Promotion of the Topf & Sons Place of Remembrance Picture: © Stadtverwaltung Erfurt, Rüdiger Bender

The first public event on the history of Topf & Sons took place in Erfurt in 1994, organized by the Europäisches Kulturzentrum Thüringen in Haus Dacheröden. On that occasion, the speaker was Harmut Topf, the great-grandson of the company’s founder. In the early 1990s, the other Topf family heirs had submitted an application to regain possession of the company facilities as well as the family’s former property in Hirnzigenweg in Erfurt, to no avail. Hartmut Topf, however, came out in favour of transferring any profits that might be earned by the family’s former assets to victims of National Socialist persecution, or of applying such funds to the fostering of tolerance and humanity toward persons of other nationalities through political youth education.

In 1998, within the context of archival research, the cultural studies specialist Eckard Schwarzenberger of Berlin came across the Topf company’s patent application for the “continuous-operation corpse incineration oven for mass use”, whereupon he visited the crematorium at the Buchenwald Memorial and the former company grounds in Erfurt. In collaboration with the Europäisches Kulturzentrum, the DGB-Bildungswerk Thüringen, the Heinrich-Böll-Stiftung and the Evangelische Akademie Thüringen, Schwarzenberger went on to realize events and projects in Erfurt. Hartmut Topf supported this initiative, which was established in 1999 as the Förderkreis Geschichtsort Topf & Söhne (Society for the Promotion of the Topf & Sons Historical Site) and, with its conferences, publications, and lectures by well-known speakers, became the motor for the debate in Erfurt. Many of the lectures were published in the form of a book: Aleida Assmann/Frank Hiddemann/Eckhard Schwarzenberger (eds.): Firma Topf & Söhne – Hersteller der Öfen für Auschwitz. Ein Fabrikgelände als Erinnerungsort? (Frankfurt and New York, 2002).

The society called for a research project on the J. A. Topf & Sons company history, an appeal which found the support of member of parliament Carsten Schneider of Erfurt. In the 1980s, during his school days, Schneider had become acquainted with the successor company VEB EMS within the context of the GDR instruction subject “Productive Work”, but had been told nothing about the company’s historical role during National Socialism. It was not until he was a member of the German parliament that – during a visit to Auschwitz, where there are still ovens made by Topf in the main camp crematorium – that he was confronted with the blame borne by the company of his native town. Beginning in 2002 the German federal commissioner of culture financed the “Topf & Sons” research project carried out by Annegret Schüle at Buchenwald Memorial and serving as the scholarly foundation of the nationally and internationally well-received exhibition “The Engineers of the ‘Final Solution’: Topf & Sons – Builders of the Auschwitz Ovens”. The society moreover voiced the demand for the use of the former company administration building in Erfurt for exhibition and documentation purposes as well as educational offers, as a means of ensuring the continued public awareness of the company’s past at the historical site. With the establishment of the Topf & Sons Place of Remembrance in Sorbenweg 7 beginning in 2008, the societal, historical and political debate launched in the 1990s has led to a positive result. The individuals who, over a period of many years, devoted themselves to calling persistently for a historically founded and educationally productive utilization of the former company grounds succeeded in making themselves heard by the responsible persons in the local government: the city of Erfurt will create and operate a place of history and learning with an exhibition and educational offers. Now the society is addressing itself to the tasks of supporting, accompanying and networking the Place of Remembrance through the acquisition of donations as well as cooperation partners, and through events and projects of its own, and thus to ensure its long-term existence.