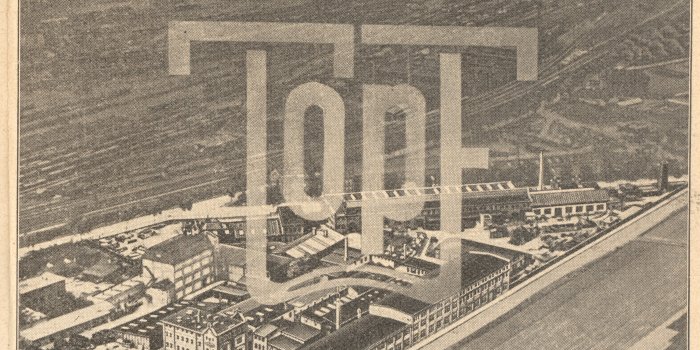 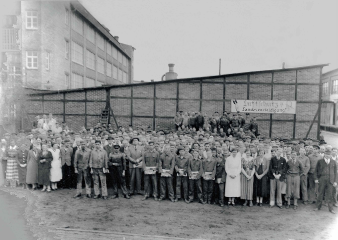 J. A. Topf (1816–1891) founds a company for the production of combustion equipment and systems.

The company J. A. Topf & Sons, a specialized manufacturer of heating systems, brewery and malting facilities, purchases land of its own on the outskirts of Erfurt (the area between the present-day Sorbenweg and Rudolstädter Str.).

The company employs a workforce of more than five hundred. It establishes a small department for the construction of incineration ovens for crematoria and becomes the market leader in this field in the 1920s.

Ludwig and Ernst Wolfgang Topf, owners and managing directors of the family business in the third generation, begin supplying the SS and its concentration camps with corpse incineration ovens specially developed by furnace construction engineer Kurt Prüfer to meet the needs of these camps.

1942–1945: Technology for the extermination of the European Jews

With full knowledge of the practises of mass murder being carried out with gas at Auschwitz, the company – on the initiative of engineer Fritz Sander – applies for a patent for a “continuous-operation corpse incineration oven for mass use”.

The large-scale crematoria in the Auschwitz-Birkenau extermination camp are equipped as “death factories” with ovens and gas chamber ventilation systems from Erfurt.

In February, Topf & Sons works on setting up a new extermination centre near Mauthausen Concentration Camp using the death factory facilities dismantled in Auschwitz-Birkenau. In April, the newly elected works council composed of Communists and Social Democrats supports the company management’s justification of its oven-supplying activities as a completely normal business relationship.

On 31 May, for fear of being arrested by the U.S. Army, Ludwig Topf commits suicide. Ernst Wolfgang Topf travels to the Western occupied zones and is prevented from returning after the Soviet army becomes the occupying force in Erfurt.

Kurt Prüfer, Fritz Sander, Karl Schultze and Gustav Braun are arrested by the Soviet army. In 1948 they will be sentenced in Moscow to twenty-five years in a penal colony for assisting the SS in committing genocide.

J. A. Topf & Sons is expropriated by the state.

The company becomes a nationally owned enterprise and is renamed Topfwerke Erfurt VEB. It is made a subsidiary of the VVB NAGEMA (association of publicly owned enterprises for mechanical engineering for the food, luxury food, refrigeration and chemical industries). The management is the same as that before 1945 except for the Topf brothers and the engineers serving penal sentences.

Ernst Wolfgang Topf refounds the J. A. Topf & Sons company in Wiesbaden and specializes in the construction of crematory and refuse incineration ovens. Legal proceedings against him are suspended. In 1954 he will move the company to Mainz.

The company in Erfurt is renamed NAGEMA VEB Maschinenfabrik “Nikos Belojannis” after a Greek Communist who had been an inmate in a German concentration camp in Greece until his escape in 1943.

The department for the construction of crematory ovens at “Nikos Belojannis” is dissolved.

The company is renamed VEB Erfurter Mälzerei- und Speicherbau (EMS) (Erfurt Oasthouse and Granary Construction), and the production of all industrial combustion systems is discontinued.

From 1993: Topf & Sons in international public 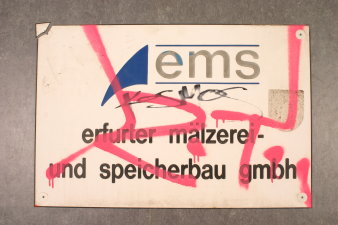 The EMS in Erfurt is privatized. Jean-Claude Pressac, author of a book on the crematoria of Auschwitz, takes decisive documents from the company archive to Paris.

The Topf & Sons Society is founded in Erfurt. It calls for a research project on the company history of J. A. Topf & Sons and advocates the utilization of the former company administration building for exhibition and documentation purposes as well as educational activities.

A section of the vacant company premises is occupied by squatters for the operation of an independent culture centre. In addition to socio-cultural projects, the “Besetztes Haus” (occupied house) also carries out events and guided tours on the history of Topf & Sons during the National Socialist era.

At Buchenwald Memorial outside Weimar, a Topf & Sons research project gets underway, financed by the German Federal Commissioner for Culture and Media.

The Thuringian State Office for the Preservation of Historical Monuments grants the administration building the status of a cultural monument and proposes its use for the depiction and critical examination of the company history. Several of the production buildings are likewise awarded monument status. In the case of demolition and new construction, the sites are to be marked.

The international travelling exhibition “Engineers of the ‘Final Solution’: Topf & Sons – Builders of the Auschwitz Ovens” realized by the Buchenwald and Mittelbau-Dora Memorials Foundation opens at the Jewish Museum in Berlin.

Mayor of Erfurt Manfred O. Ruge and director of the Buchenwald and Mittelbau-Dora Memorials Foundation, Prof. Dr. Volkhard Knigge, agree to place the exhibition – following its presentations elsewhere – on permanent view in the former Topf & Sons administration building in Erfurt, as the core of the “Place of Remembrance”. The city finances the completion of the monograph on Topf & Sons and the development of concepts for the use and operation of the Place of Remembrance and its educational activities.

The Erfurt municipal council unanimously passes a resolution to establish and operate a Place of Remembrance in the former administration building of the Topf & Sons company.

The Domicil Hausbau GmbH & CO KG in Mühlhausen, Thuringia assumes ownership of the former Topf & Sons company premises, thus entering into a partnership with the city of Erfurt for the establishment of the Place of Remembrance and becoming the landlord of the rooms in the administration building and the outdoor facilities. The city draws up a new land-use plan for the grounds, specifying the utilization of the administration building and its forecourt as a Place of Remembrance and enabling the investor to build a shopping centre and residential flats there. The Ministry of Culture of the Free State of Thuringia and the German Federal Commissioner for Culture and Media grant funds in the amount of 600,000 Euros total for the establishment of the Place of Remembrance.

In January, the negotiations between the city of Erfurt and the organization “Besetztes Haus” over an alternative space for the independent culture centre fail. The “Besetztes Haus” turns down the city’s offer of an alternative location. Having initially attempted to make an amicable solution possible by extending the culture centre’s lease for several months, the owners can meanwhile afford no further delays in the construction and effect an eviction order from the regional court, leading to the eviction of the “Besetztes Haus” by the police on 16 April. The administration building is protected from further decay by the installation of a new roof and new windows. At the construction site, guided tours on the history of the premises and the plans for the Place of Remembrance are possible upon request.

The interior construction of the Place of Remembrance begins in the interior of the administration building. 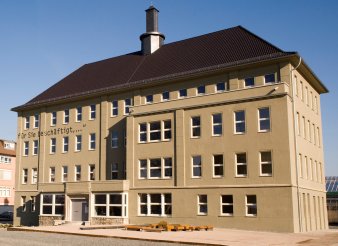 The Topf & Sons – Builders of the Auschwitz Ovens Place of Remembrance is opened on 27 January 2011, the International Holocaust Remembrance Day.