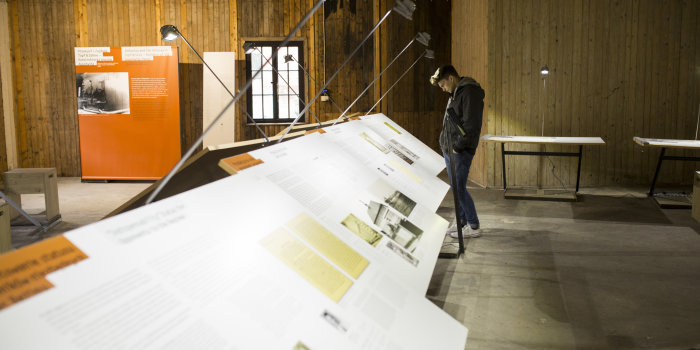 Along with the records of the SS Central Construction Management and interrogation transcripts from Moscow, the Topf & Sons corporate archives provided the basis for the research undertaken in preparation for the exhibition. These archives only became accessible to the public again in 2004. Before that, a large proportion of the files had come into the possession of Jean-Claude Pressac, the first person to concern himself with how the crematoria had been constructed. A former Holocaust denier, he ultimately came to the conclusion that mass murder was not only technically possible in the Auschwitz crematoria, but had actually taken place there. The exhibition features documents from Auschwitz and Moscow as well as internal records from the Topf archives and sheds light on their meaning.

Topf & Sons’ unreserved cooperation with the SS – which becomes clearly evident in the exhibition – is especially disturbing, because neither the company owners nor the staff members involved correspond to the image of the fanatical Nazi or the radical anti-Semite. They were neither just “cogs in the wheel” nor mere “desk murderers”. What is more, they did not act on order or under force, and they knew the precise purpose of the technology they were developing. They could have discontinued or limited their business relations with the SS without serious consequences.

A few simple facts evidently sufficed to motivate their willingness to cooperate: that mass murder and the industrial destruction of human life were the will of the state, that certain individuals in the company stood to make a profit, and that the related technical challenges spurred the engineers’ ambitions. The abandonment of a sense of humanity towards those whom the National Socialists wanted to ostracize and annihilate became manifest as complicity in mass crimes.

The murder of millions of human beings in Auschwitz and the other German concentration and extermination camps presented the perpetrators with technical problems. The killing and the disposal of the corpses were to be carried out continuously and inexpensively in a manner that economized on fuel and left as little evidence behind as possible. In order to contrive such a system, the SS had to rely on civilian experts who had no scruples about thinking their way into the practical problems of extermination and developing appropriate solutions. The Erfurt company J. A. Topf & Sons played a decisive role in this process. The exhibition tells the story of this perfectly normal company. It begins in late nineteenth-century Erfurt and leads to the crematoria of Auschwitz.

In 1878, the master brewer Johannes Andreas Topf of Erfurt founded a company for the construction of incineration facilities. By the early twentieth century, under the direction of his sons, Topf & Sons had developed to become one of the world’s major producers of brewery equipment. In 1914, the company entered a new market: the construction of furnaces for municipal crematoria. Although these specialized ovens represented no more than a minor sideline, the company soon made a name for itself in Germany as a leader in the field, its products setting new standards for the practise of reverent cremation.

In the early 1930s, Ludwig and Ernst Wolfgang Topf took charge of the business their grandfather had founded. The company was struggling financially as a result of the Great Depression, but the new managers succeeded in consolidating it by obtaining lucrative orders from the German army for granaries. They made little profit on the orders from the SS, however, the latter accounting for less than two percent of the turnover. In 1941 Ludwig Topf was able to evade military service with the aid of the SS in Auschwitz. After the war he committed suicide. Ernst Wolfgang Topf settled in the west and attempted to carry on the J. A. Topf & Sons business with the construction of crematorium and waste incineration ovens.

The Topf brothers were dependent on the experience gathered over the course of many years by their department heads and engineers, who developed the special systems subsequently produced in the company factories. There were tensions between the company management and the furnace construction engineer Kurt Prüfer because he was dissatisfied with his salary and his status and was not entrusted with executive responsibilities. It was he who promoted the business partnership which developed from 1939 onwards between Topf & Sons and the SS. One of the four engineers to be arrested and sentenced by the Soviet authorities in 1946, Prüfer died in a gulag in 1952.

The Concentration Camp Business: Connivers and Accomplices in the Company

Despite their suppression efforts, the connivers and accomplices left traces of their deeds behind. Evidence of a sometimes quite inconspicuous kind is to be found in the documents presented here. To meet the demands of the SS, the company management, engineers and fitters supplied not only incineration ovens for the disposal of murdered human beings, but also perfected the gas chambers. To that end, they had to observe the initial mass killing and incineration operations in the crematoria. The participating employees used the insights thus gained to optimize the extermination machinery.

Testimonies from the Death Factories

Even before the liberation of Auschwitz, concentration camp inmates who witnessed the mass murder endeavoured to leave testimony to the crimes behind. The reports written by members of the Sonderkommando (special detachment) forced to perform labour in the crematoria serve to document the mass murder and corpse disposal procedures from first-hand experience and preserve the memory of the crimes carried out against the victims. At the same time, they confirm the significance of the role played by Topf & Sons in the efforts to perfect the industrially operated extermination system.

Topf & Sons as Partners of the SS: Initiatives and Advantages

Under National Socialism, the extermination of human beings was not a mere passing occurrence. It was an undertaking quite apparently designed for permanency and expansion, as was recognized by Topf & Sons. On their own initiative, the company engineers invented more efficient facilities for the disposal of more and more human beings. With their construction designs, they hastened to remain ahead of the demands made by the SS. The advantages they gained for their efforts were modest and limited to only some of those involved.

After the War: Preservation of Evidence – Commemoration – Denial

In order to cover the traces of their crimes, the SS dynamited the Auschwitz-Birkenau crematoria in January 1945. Yet the ruins remained, testifying to the mass murder. The vestiges of the crematoria soon served symbolically as grave markers and commemorative stones. The Topf & Sons company management as well as the involved employees denied all charges of guilt and responsibility for the crimes. The SS were depicted as the sole bearer of guilt. In the successor firm of the German Democratic Republic, the attempt was made to lay all blame on the capitalist (former) company owners.

The exhibition is bilingual and exists in the following versions:

Component parts of the exhibition

If the material is loaded in a space-saving manner, and taking into consideration the maximum permitted loads, two 3.5-t panel vans (e.g. VW Crafter or Mercedes Sprinter), one long with normal roof (14 m3 loading capacity) and one short with high roof (11 m3 loading capacity) should suffice.

Other: For loading at the Saline in Erfurt (theatre depot) with truck ramp, and taking into account the maximum permitted load, instead of the panel van, a 7.5-t medium-sized box truck with tail lift is the optimum solution.

For the loading and unloading of the exhibition, three strong helpers and a hand truck are required.

The borrower shall provide sufficient connections for lighting and other power consumers.

The exhibition is lent free of charge.

The borrower shall bear the effort and costs for:

Please contact us if you are interested in borrowing the exhibition “Industry and Holocaust: Topf & Sons – Builders of the Auschwitz Ovens” for a specific time period.