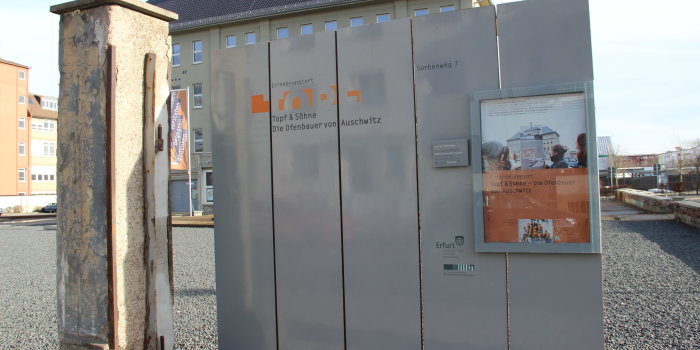 Registration for groups through the permanent exhibition and / or the special exhibition.

Location in the map

The Topf & Sons Place of Remembrance is located at Sorbenweg 7, 99099 Erfurt.

The nearest tram stop is Robert-Koch-Straße, which is one stop past the main station on tram line nos. 3 and 4. Head south from the tram stop and turn left onto Holbeinstraße, cross Clara-Zetkin-Straße and continue to the next intersection. There turn left onto Wilhelm-Busch-Straße and take your second right onto Nonnenrain. You are now heading straight for the grounds of the Place of Remembrance. The walk from the tram stop to the Place of Remembrance takes about fifteen minutes.

You can also reach the Place of Remembrance from the main station on foot. Leave the station through the side exit marked “Bahnhofstraße” and turn left onto Bahnhofstraße. After you have crossed the railway crossover, you will be facing the stairway up to the Stadtpark. Do not climb the steps but turn left onto the footpath leading around the Stadtpark (parallel to the tracks). After a few metres, the path curves towards the right and you are on Windthorststraße. Take the next left onto Nonnenrain. Continue along Nonnenrain for about ten minutes, crossing Clara-Zetkin-Straße and Wilhelm-Busch-Straße. After you cross Wilhelm-Busch-Straße, you will be heading straight for the grounds of the Place of Remembrance. The walk from the main station takes about fifteen minutes.

The Place of Remembrance is located on Route B7 in the direction of Weimar.

There are also parking lots. 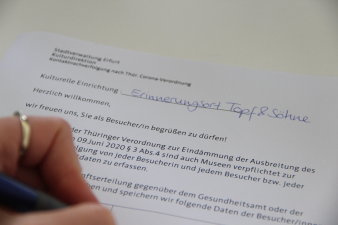 To ensure the safety of all our visitors and staff, we request that you observe the following regulations:
Please use the hand sanitizer dispensers in the entrance area. All visitors are required to wear protective face coverings. In keeping with the “Thuringian Ordinance of 18 August 2020 on the Continuous Adaptation of the Measures Required to Contain the Spread of the Sars-CoV-2 Coronavirus”, the Topf & Sons Place of Remembrance is obligated to record the contact details of every visitor / every family for the purpose of contact tracing. The information is kept for four weeks and then destroyed in accordance with data protection regulations.

If you feel unwell or have had contact to anyone with Covid-19 within the past 14 days, we request that you refrain from visiting in the interest of general infection prevention.