In October 2019 young people from the Ukraine, Poland and Germany met in Oświęcim to visit the memorial site of Auschwitz-Birkenau. They reflected on the history of the Holocaust as well as its implications for their own generation and those still to come. In their text Daniil, Kate and Tom discuss this issue from different perspectives. 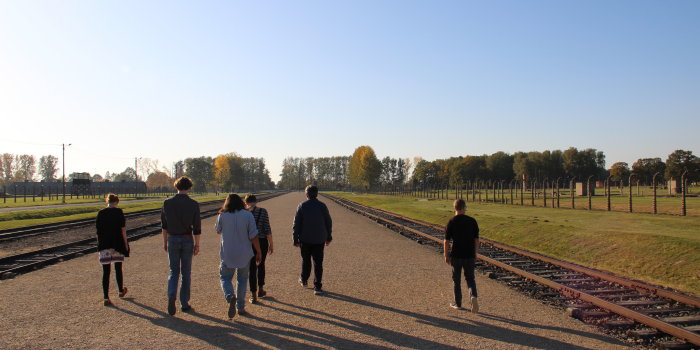 Zoom Picture: The group at the memorial site of Auschwitz-Birkenau Picture: © Stadtverwaltung Erfurt

The manufacturers who merely produced a standard incineration system cannot be held responsible for the death of the corpses later burnt in the ovens they produced.

Ernst Wolfgang Topf during an interrogation after the war

In 1878, the company Topf & Sons was founded by Johann Andreas Topf. Until the Second World War they produced malt houses, gas-tight doors and windows and also combustion plants for industry. A department for cremation ovens existed from 1914 onwards, but it contributed only about 3% of the total sales. In 1934, the cremation law was enacted after a lot of people fought for it. One of them was Kurt Pruefer, an engineer at Topf & Sons.

From my perspective the Topf & Sons company developed the very basis for the killing of millions of people. They provided a means of disposing of thousands of corpses every day.

Talking about those developments, you have to think about motivations. Money? The SS was a bad customer and there were often problems with the payment of bills. Rather, the engineers at Topf & Sons wanted to reach personal goals and were pushing each other for even more horrific developments. And the fact that Kurt Pruefer fought for the cremation law, only to break it a couple of years later with his ovens for the SS, is another sick part of this company’s history.

Even if those are only a few facts about Topf & Sons, they are enough to form my opinion that Topf & Sons developed the basis for killing millions of people. Considering the motivation of the engineers, we have to be wary that such a kind of ideological work never takes place again.

The firm rarely, if ever, actually harmed anyone directly. However, their actions were often indispensable to the execution of the Holocaust. In the years of its cooperation with the Third Reich, the company sought to be the best at everything. For example, new designs incorporated a rounded opening (rather than the standard square coffin-sized opening) in order to allow multiple bodies to be burned simultaneously, despite the fact that this was still illegal under German law.

In the case of Topf & Sons, it was people – who had something to gain: money, glory or career advancement. They were opportunists, prepared to put aside all human morality to advance themselves in the smallest of ways. Ernst Wolfgang Topf was not prosecuted after the war for abetting the Nazis’ genocide machine. So Topf & Sons demonstrates how easy it is for people to ignore responsibility towards others through their activities. The main factors of cooperation with the Third Reich were fame and the desire to be perfect in everything, not wanting to think about the consequences of their actions.

In my opinion, if we talk about the actions of Topf & Sons, it will be a conversation about a crime and morality, first of all. Facts tell us that neither compulsion, nor money, nor political views were significant reasons. Therefore, I consider all the actions of the company extremely selfish, as the employees themselves were. Focussing on status, their "extraordinary technical skills" and ambition made the company forget about all moral standards. Acts and their consequences, the sense of which cannot be realized, or is simply ignored, will never have a good ending. One will never be able to objectively evaluate the social-cultural context in which they acted at that moment in their lives. In a peaceful time, one imprudence can be worth a lot, but in times of war, such actions can easily become a catastrophe for all of humanity.

Every member of our group is aware that there will be and are companies who try to work like Topf & Sons for personal goals and fame without thinking about the consequences for humanity, e.g. the pharmaceutical companies. It is our task to prevent such working methods and to take care of our future.

Web dialogue Back to main page
Share this page