Even before the liberation of Auschwitz, concentration camp inmates who witnessed the mass murder endeavoured to leave behind testimony to the crimes. Here is a collection of the reports written by members of the Sonderkommando (special detachment) forced to perform labour in the crematoria. These accounts serve to document the mass murder and corpse disposal procedures from personal experience. They testify to the crimes carried out against the victims. At the same time, they confirm the significance of the role played by Topf & Sons in the perfection of the industrially operated extermination system. 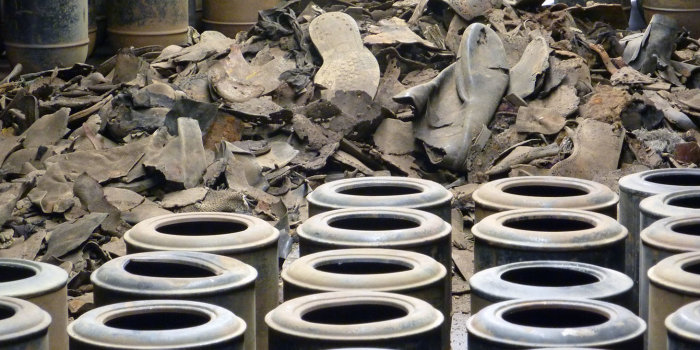 “Since I’ve been here I have never once thought about the possibility of returning; I’ve known as well as everyone else that our connection with that world is broken; this here is a different world It’s hell, if you will, but Dante’s hell is abominably ridiculous in comparison to the reality of this place, and we are eyewitnesses who will not be permitted to survive.”

From the secret notes of Chaim Herman, inmate of the Sonderkommando, murdered by the SS at the end of 1944

"Each crematorium had two iron stretchers for loading corpses. … Two prisoners loaded corpses on them. The first corpse was placed face up with its feet towards the oven. A second was placed on top of it, also face up, but with its head towards the oven. It was done in this way so that the corpse on top would hold the legs of the corps underneath together, while the legs of the top corpse would not have to be forced into the oven but would rather be pulled in. Two prisoners saw to the loading of corpses onto the stretcher. Two others stood with a rod placed under the stretcher at the end nearer the oven. During loading, one of them opened the receptacle door while the other placed the rollers underneath. A fifth prisoner lifted the stretcher by its handles. When the end nearest the receptacle had been raised and placed on the rollers by the two prisoners holding the rod, the fifth prisoner pushed it in. When the corpses were already inside, a sixth prisoner used an iron hoe to hold them in place while the fifth prisoner pulled the stretcher out. … Finally, the SS commander checked after each load that the ovens had been properly packed. We had to open the doors of each receptacle for him, and this gave us a chance to see what was happening inside."

Henryk Tauber, former inmate of the Sonderkommando, excerpt from his testimony before the Polish committee appointed to investigate the crimes committed in Auschwitz, May 1945